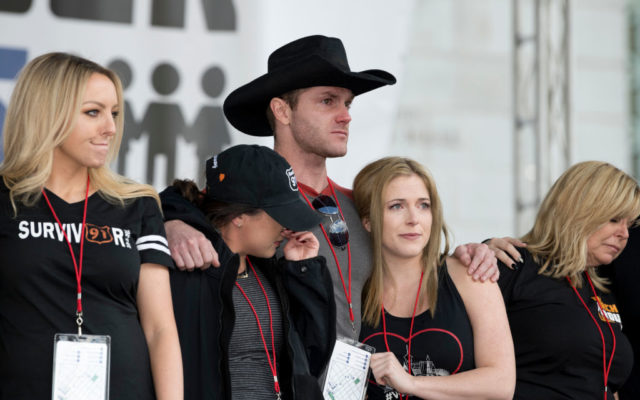 Survivors of the Route 91 Las Vegas shooting take part in March for Our Lives in Los Angeles, California on March 24, 2018. The march was organized in response to the massacre at Marjory Stoneman Douglas High School in Florida where 17 people were killed in a mass shooting. Similar gun control rallies took place across the US. (Photo by Ronen Tivony/NurPhoto via Getty Images)

The former site of the Route 91 Harvest music festival is being converted into a parking lot and athletic center, but two acres of the site will become a memorial honoring the victims and survivors of the mass shooting there in 2017.

In a statement, MGM Resorts said: “Having a permanent memorial commemorating the victims and heroes of 1 October is vital to our community’s continued healing, and we are honored to donate a portion of the Village site to help bring that memorial to fruition. We look forward to supporting the 1 October Memorial Committee as it proceeds with planning for the memorial.”