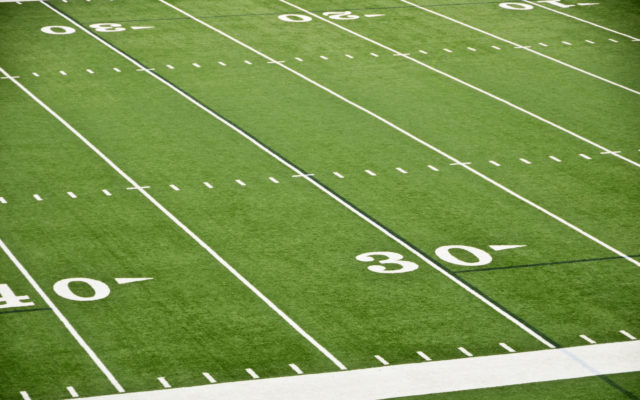 In Section 1 9-Man semi-final football action that you heard Saturday evening on AM 1480 KAUS, the Grand Meadow Superlarks, the No. 2 seed in Section 1 played host to No. 3 seeed LeRoy/Ostrander, and Cardinals quarterback Chase Johnson tallied yet another monster game this season with 36 carries for 265 yards and three touchdowns, and running back Tanner Olson added 15 carries for 92 yards and two scores as LeRoy/Ostrander held off a late Superlark charge to win 39-34.

Grand Meadow turned two early Cardinal turnovers into a 12-0 lead on a 29-yard touchdown pass from quarterback Taylor Glynn to running back Dusty Copley, and a 61-yard scoring strike from Glynn to wide receiver Jace Kraft.   LeRoy/Ostrander then wrested momentum away from the Larks as on their next drive starting from their own 38, a 35-yard run by Johnson helped to spark the Cardinal offense, and Tanner Olson capped off the drive on the eighth play with a 3-yard touchdown run and a 12-7 Grand Meadow lead after Gavin Sweeny’s extra point.

LeRoy/Ostrander took the lead on their next drive when Johnson scored on a 33-yard touchdown run and a 15-12 lead after Layne Bird hauled in a 2-point conversion pass from Johnson.  The Cardinals kept the momentum rolling their way when a punt snap for Grand Meadow sailed over the head of punter Dusty Copley and out of the end zone on the Larks’ next drive for a safety and a 17-12 lead, and starting from their own 43-yard line after the ensuing free kick, the Cardinals capped off a seven play drive with a 10-yard touchdown run from Johnson and a 25-12 lead after Bird’s 2-point conversion run.

Grand Meadow stemmed the Cardinal tide on their next drive as starting from their own 30, a 22-yard pass from Glynn to Kraft helped the Larks move the ball to midfield, and on the seventh play of the drive, Grand Meadow was facing 3rd and 15 from their own 49 when Glynn dumped off a screen pass to Copley, who then eluded the Cardinal defense on his way to the end zone and a 25-20 LeRoy/Ostrander lead at the half after the 2-point conversion pass from Glynn to Kraft.

The second half started in bizzare fashion with five combined turnovers for the two teams in the first 11 plays from scrimmage, but after an interception, the Cardinals put the ball in play from their own 32.  11 plays later, Johnson ran the ball into the end zone from 10 yards out and a 31-20 lead after the 2-point conversion was no good.  Grand Meadow’s Corbin Ludemann ran the ensuing kickoff back 48 yards to the LeRoy/Ostrander 40, but Johnson intercepted a Glynn pass on the fourth play of the drive and dashed all the way back to the Superlarks 30.  On the first play of the enusing drive, Olson found running room on the left side of the line and rumbled down the sideline for a 30-yard touchdown and a 39-20 lead after he ran the ball into the end zone for the 2-point conversion.

Grand Meadow would not go quietly into the night, however, as starting from their own 43 after the kickoff in the 4th quarter, Ludemann capped off a five-play drive with a 25-yard touchdown run to cut the Cardinal lead to 39-26 after the 2-point converison was no good, and after the Superlarks defense forced a turnover on downs, their offense mounted a drive starting from their own 25 as a 39-yard pass to Ludemann, and catches of 18, 10 and 4 yards for wide receiver Cael Gilbert moved the ball to the 1-yard line where Glynn found Copley in the end zone with a touchdown pass and a 39-34 Cardinal lead after Ludemann’s 2-point conversion run.

With the game now late in the 4th quarter, LeRoy/Ostrander started their next drive from their own 40 and needing at least two first downs to run out the clock and claim the victory.  Johnson called his own number for the first first down of the crucial drive, and with Grand Meadow out of timeouts and the Cardinals facing 3rd and inches at the Superlark 40-yard line, it was Johnson again picking up the needed yardage and iciing the win for the Cardinals.

With the win, LeRoy/Ostrander is now 8-2 on the season, and they advance to play top-seeded Lanesboro in the Section 1 9-Man final at Triton High School in Dodge Center Friday night at 7:00 p.m. after the Burros downed No. 4 seed Southland Saturday night by a score of 45-21.  The Cardinals will be looking to avenge a 38-27 loss to the Burros back in Week 3 to advance to the State Class 9-Man football tournament.  The loss for Grand Meadow snapped an eight game winning streak for the Superlarks, who finish with a record of 8-2.

In Blooming Prairie Saturday evening, the Awesome Blossoms, the No. 1 seed in Section 2AA and the No. 1 ranked team in the state in the last Class AA poll played host to fourth-seeded St. Clair/Mankato Loyola, and senior quarterback Drew Kittleson was a razor-sharp 13 of 14 for 200 yards, four touchdowns and one interception, plus he ran the ball five times for 92 yards and another score, and running back Tyler Archer carried the ball 22 times for 131 yards and one TD as the Blossoms rolled by the Spartans 47-19.

Carson Brenneke tallied four catches for 94 yards and three touchdowns, plus he added a rushing touchdown in the win, and Cade Christenson hauled in four passes for 35 yards and a score for the Blossoms, who are 10-0 on the season.  Blooming Prairie will square off with No. 2 seed Maple River for the Section 2AA championship Friday night at Janesville-Waldorf-Pemberton High School after the Eagles edged the Buccaneers 8-7 in overtime Saturday.  You’ll hear the game Friday night right here on AM 1480 KAUS, with the pre-game show getting underway at 6:30 p.m., and kickoff at 7:00 p.m.  You can also listen to the game worldwide on our webpage at myaustinminnesota.com, and on the I Heart Radio and Radio.com apps.