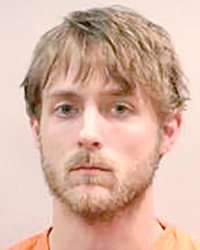 An Austin man convicted on felony DWI and burglary charges in Mower County District Court has been sentenced to prison time.

29-year-old Garrett Dean Lukes was sentenced Friday to 36 months in prison for a felony charge of 1st degree DWI, under the influence of a controlled substance stemming from an incident that took place on October 24th, 2017.  Lukes pleaded guilty to the charge in April of 2018, and he was convicted in September of the same year.  A gross misdemeanor charge for violating limited license restrictions with alcohol or a controlled substance, and misdemeanor charges for operating a motor vehicle without ignition interlock and for no proof of insurance in the case were dismissed with Lukes’ guilty plea.

Lukes was also sentenced Friday to 21 months in prison on a felony 3rd degree burglary charge after stealing approximately $1,500 from Steve’s Pizza in Austin in May of 2018.  Lukes first pleaded guilty to the charge in July of 2019, and he was convicted in October of that year.  Judge Kevin Siefken ruled that the two prison sentences can be served concurrently, and a felony charge of theft, taking, using or transferring movable property without consent in the case was dismissed with Lukes’ guilty plea.