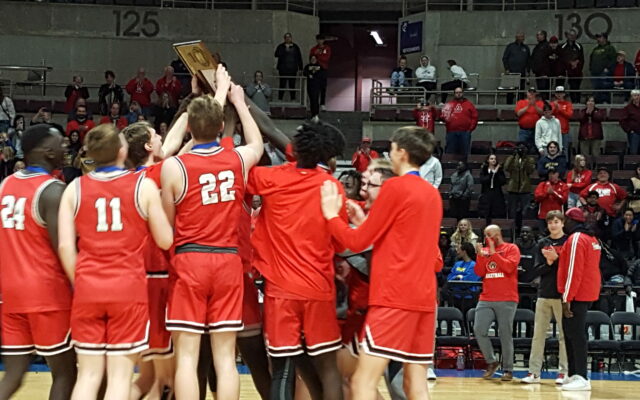 The Austin Packers boys basketball team, the No. 1 seed in the Section 1AAA tournament was looking for the storied program’s 33rd trip to the state boys basketball tournament versus No. 3 seed Winona in the section final at the Rochester Civic Center Arena Friday evening, and in a grind-it-out, half-court battle between the two Big 9 Conference squads, the Packers swarming defense proved to be the difference in a 46-39 win that will also give Head Coach Kris Fadness one more opprotunity to coach at the state tournament.

The slow, half-court tempo of the game was set early on as the Winhawks briefly held a two-point lead, but it would eventually be their last lead of the night as Austin worked their way in front 8-5, and the Packers continued their scoring run when junior guard Jack Lang scored on a layup with 6:18 to go in the half to give Austin their biggest lead of the half at nine points at 14-5.  Winona, however countered back with an 8-2 run of their own led by 6’5″ senior guard/forward Jasper Hedin to cut Austin’s lead to 16-13 with two minutes left, but a 3-pointer from junior guard Cham Okey from the left angle just before the buzzer pushed the Packer lead back to six at the half at 19-13.

Austin kept up their intensity to start the second half as a 3-pointer from senior guard Gage Manahan capped off a 10-3 Packer run to start the half to push their lead to 13 points at 29-16, and another 3-pointer from Lang, who scored 10 of his 12 points in the second half with 11:00 left kept the Austin lead at 12 at 32-20.  Two field goals from Hedin cut the Packer lead to nine on two different occasions, the second basket making the score 32-23 with 9:38 to go, but a short time later, a tough, off-balance lefthanded shot by Okey in the lane from short range and a steal and a layup from Manahan boosted Austin’s lead to its biggest of the night at 14 points at 38-24.  The Packer defense continued to smother and frustrate the Winhawks, who eventually had to switch from a 2-3 zone to man-to-man to foul Austin to stop the clock and eventually put them at the free throw line down the stretch.  The Packers, who did not shoot a free throw in the first half shot 21 of them in the second half, and although they only hit six of them, their defense again proved the biggest key to the win as Winona could not capitalize fully on the misses and the lead stayed at three possessions the rest of the way.

Besides Lang’s 12 points, Cham Okey tallied 10 points, Ater Manyuon scored eight points off the Austin bench in the first half, Gage Manahan scored all seven of his points in the second half, Kaden Murley added five points and Victor Idris scored four points for the Packers, who held Winona to only 2 for 18 shooting from behind the 3-point arc for 11%, and only 16-51 from the field for the game for 31%.  Austin also more than held their own against the Winhawks in the rebound department, as Winona tallied 30 rebounds to Austin’s 29 after heavily outrebounding the Packers in the two regular season meetings between the two teams.