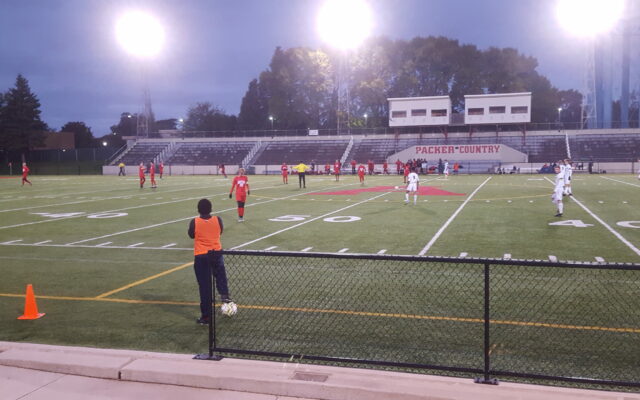 The Austin Packers boys soccer team, the No. 3 seed in the Section 1AA tournament was looking to advance to the State Boys’ Soccer Tournament for the fifth time in school history versus top-seeded Winona in the section final at Art Hass Stadium Tuesday evening, and for the second game in a row, the Packers were able to earn a win via a penalty kick shootout as they won the shootout 4-1 to take the match and the section title by a 1-0 score.

The two Big 9 Conference rivals battled to a 0-0 tie after one half of play, with the Winhawks, who edged Austin at Art Hass Stadium 1-0 on September 22nd having the best scoring chance of the half when senior tri-captain Mason Mueller let fly with a left-footed blast straight away in the penalty area from 17 yards out, only to be denied a goal by Packer senior goalkeeper Dane Mitchell, who made a fantastic leaping save to his left to keep the game scoreless.

Winona again had the better scoring chances in the second half, but again it was Mitchell rising to the fore for Austin by making not one, but two brillant saves in quick succession in the 64th minute when he stopped one close-in chance and then somehow turned away a shot on the rebound by Winona’s Nico Stern to keep the game scoreless.  The two teams then battled through a scoreless first sudden-death overtime period, and the Packers nearly ended the match in the second sudden-death overtime period when senior midfielder Oo Reh clipped the top of the crossbar straight away from 22 yards out, but the second OT ended with still no score, sending the match into a best-of-five penalty kick shootout.

Austin won the toss and elected to shoot first, and junior defender Nicholas Asmus gave the Packers a quick 1-0 lead when he rifled a shot into the upper right corner of the goal.  Austin then picked up more momentum when Mitchell made yet another sparkling save, this one on Winona junior tri-captain Nyle Abdel-Magid by diving to his right and just getting a hand on the shot, sending it wide of the back post.  The Packers next sent senior defender Andrew Clausman to the penalty spot, and he blasted a strike past Winhawks junior goalkeeper Max Uribe to give Ausitn a 2-0 lead.  Austin gained yet more momentum when Winona’s next shooter,  senior Rory Briggs missed the top left corner of the goal to keep the score at 2-0.  The Packers then gained a stranglehold on the shootout as junior defender Ter Reh fired his attempt past Uribe to give Austin a nearly insurmountable 3-0 lead.  Junior Diptanshu Roka kept Winona alive as he converted on his attempt to make the score 3-1, but sophomore midfielder Leo Hernandez then stepped up and ended things with a goal on his attempt to give Austin the 4-1 shootout win and a 1-0 win for the match and a Section 1AA title.

The Packers, who were making their seventh straight appearance in a section title game will be making their fifth trip to the state tournament in school history, the other trips coming in 2009, 2017, 2018 and 2019.  Unofficially, Austin had seven shots on goal to 13 for Winona, and the Winhawks also took seven corner kicks to four for the Packers.  Austin will now play in the State Class AA boys soccer quarterfinals either next Tuesday, Wednesday or Thursday, against an opponent, a site and time yet to be determined.