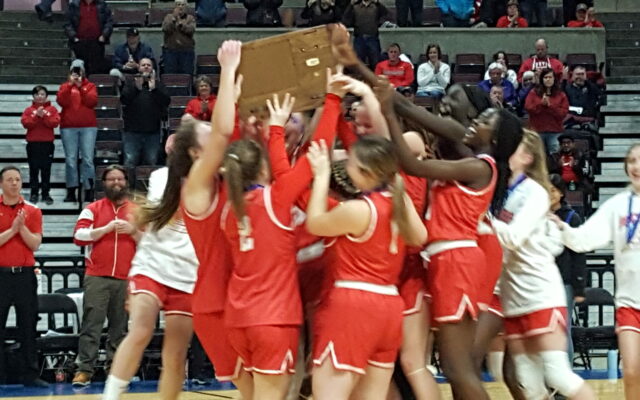 The Austin Packers girls basketball team, the No. 1 seed in the Section 1AAA tournament took on the Stewartville Tigers, the No. 2 seed in the section championship game Friday night at the Mayo Civic Center Arena in Rochester, and when their mettle was tested in a large way in the second half, the veteran Packers responded and reeled off a 15-2 run in the closing minutes to pull away for a 72-57 win, and their second straight Section 1AAA title.

Stewartville took what turned out to be their only lead of the game at 2-0 in the opening moments, but Austin responded with a 7-0 run to take a 7-2 lead with 14:50 to go in the first half.  The Packers used 14 first half points from senior forward Reana Schmitt and 10 points from senior guard Hope Dudycha to slowly increase their lead to as large as 12 at 35-23 with 2:30 to go, but the Tigers outscored the Packers 8-4 the rest of the way to cut the Austin lead to 39-31 at the halftime break.

Stewartville kept their momentum going their way to start the second half as they went on a 13-6 run to cut Austin’s lead to one at 45-44 with 13:16 left, but the Packers picked up two huge baskets from freshman guard Ajiem Agwa off the bench, one on a feed from Hope Dudycha for a backdoor layup and a 3-pointer from the left corner to increase their lead to 50-44 with 11:37 to go.  The young Tigers continued to battle, though, as they cut Austin’s lead to three at 52-49 with 7:41 left on the second half clock.  After a Tiger timeout, Hope Dudycha was able to get to the free-throw line for the Packers, and her two free throws sparked a critical 9-0 run, which was also keyed by a 3-pointer from Olivia Walsh from the right corner and a layup from Walsh on a spin move the the hoop after a Stewartville turnover.  Austin wound up outscoring the Tigers 15-2 in a span of 5:54 to crack the game wide open and take their largest lead at 18 points at 67-49, while their defense clamped down and held Stewartville scoreless for that span of time as well on their way to a section championship.

Hope Dudycha wound up with 22 points to lead Austin offensivley, including going 12 for 13 at the free throw line,  Reana Schmitt wound up with 16 points, Olivia Walsh was also in double figures in scoring with 15 points and Ajiem Agwa not only supplied eight crucial points off the bench, she also helped the Packers to the win with stout defense and energy when she was on the floor.  Emma Dudycha tallied six points and Cassidy Shute scored four points for Austin, who will head into the State Class AAA tournament with a 24-5 record.

This will be the sixth trip to state for Austin in the program’s history, with the other state appearances in 1976, 2004, 2008, 2019 and 2021.  The Packers will begin state tournament play at Maturi Pavillion on the University of Minnesota campus next Wednesday against an opponent yet to be determined at a time also yet to be determined.