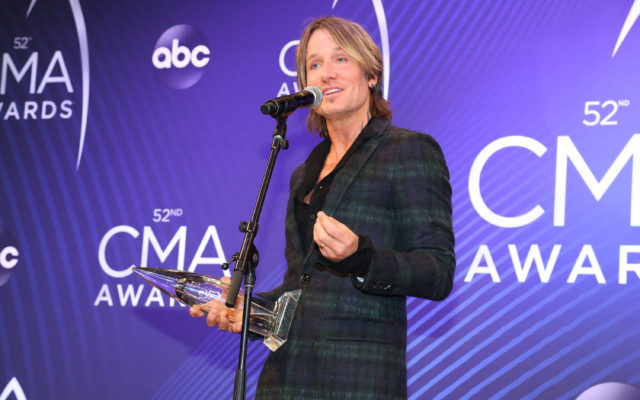 NASHVILLE, TN - NOVEMBER 14: (FOR EDITORIAL USE ONLY) Singer-songwriter Keith Urban speaks to the press during the 52nd annual CMA Awards at the Bridgestone Arena on November 14, 2018 in Nashville, Tennessee. (Photo by Terry Wyatt/Getty Images)

When the CMAs announced the show would NOT be virtual, I think we all wondered exactly how they planned to pull that off. Well, here are a few details!

Every single person is being tested “before entering the footprint” of the place. And many are being tested repeatedly. Everyone is required to wear the appropriate protective gear, and everyone “must practice social and physical distancing.”

There won’t be any fans, but there will be an audience of artists and industry people. They’ll be seated banquet-style with tables on the floor of the awards show area that are spaced eight feet apart. Only one artist and their guest will occupy each table.

There are always multiple stages at awards shows so that stays the same, but “deep cleaning protocols” will happen in between performances. That takes time, so around 40% of the 20 performances are being pre-recorded.

Also, one stage will be dedicated solely to awards presentations and everyone is being asked to “elbow” the winners instead of throwing their arms around them.

There won’t be a traditional red carpet either . . . although you WILL see photos of artists and their guests arriving, just like you did before the ACMs in September.