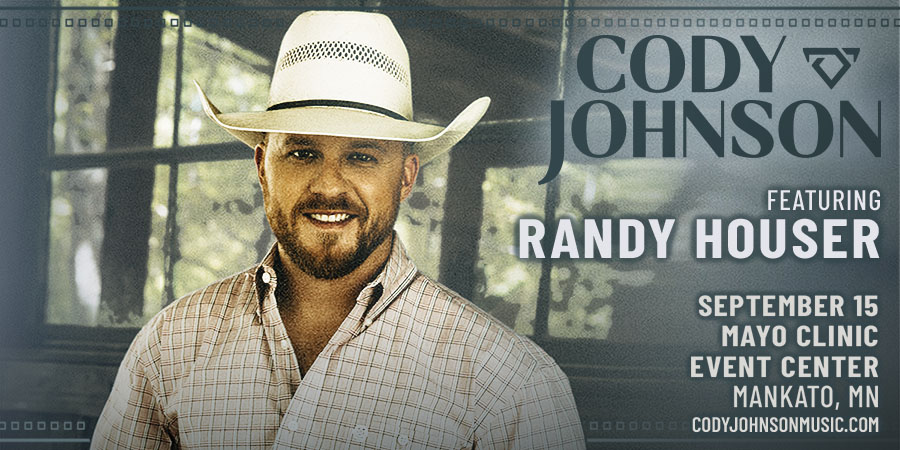 Cody Johnson has just announced 23 new dates for the final part of 2022, including what is sure to be a sold-out show in Mankato, MN.

Cody Johnson, along with country music mainstay, Randy Houser, will be tearing up the stage at Mayo Clinic Health Systems Event Center on Thursday, September 15th.

Enter for a chance to win tickets:

Cody Johnson is releasing the title track off his sophomore major-label release Human The Double Album to country radio next month, impacting June 6. “Human,” written by Tony Lane and Travis Meadow, was triumphed by Bob Oermann in Music Row, “I didn’t think it was possible to follow a perfect performance like “Til You Can’t”, but this (“Human”) stunning meditation on frailty and mistakes is just as breathtaking. This man is dusted with the glitter of superstardom.” Billboard praised it as a“gut-punch, heart-on-your-sleeve vulnerability” and People Magazine said the song is “a vulnerable ballad about mistakes and forgiveness.” “Human” is the second single to be released off the 18-song project following the highly successful two-week #1 hit “’Til You Can’t.”

Cody introduced “Human” before he performed the song at the iHeart Music Festival in Austin on May 7, “One thing we all have in common not just in the U.S. but across the world; no matter how you feel about politics, no matter how you feel about religion, no matter what race you are, no matter how much money you have in your bank account, whether you dress like me or like you do, one thing we all have in common is the fact we’re Human. We are all the same. We’ve gone through a lot in this country the last two years. We are all doing this together. We all have struggles even though they are different. This is why I chose this song to be the next single.” Bobby Bones declared, “Cody Johnson is the winner of #iHeartCountry2022 Festival for his epic performance.” “’Til You Can’t” is now certified Platinum by RIAA, bringing his career certifications total to 14, further cementing the tremendous impact of the “roaring barn burner about seizing today, living with gusto and chasing your dreams no matter how big” (MusicRow) song. Cody won one of his two recent CMT Music Awards (Male Video of The Year) for the tune’s official music video and he performed “’Til You Can’t” on The Tonight Show Starring Jimmy Fallon and The Kelly Clarkson Show. To date the song has logged nearly 275 million global streams.