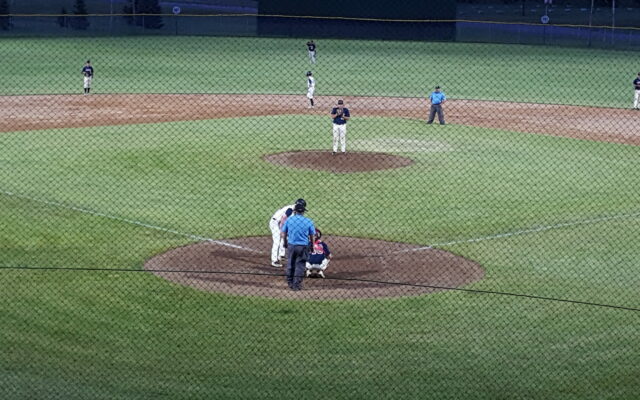 The Austin Greyhounds were looking for win number four in a row at Marcusen Park Friday night as they played host to the Dodge County Diamondbacks in a Twin Rivers League matchup, but it was the Diamondbacks working their way to a 4-0 lead, and then holding off a late charge from the Greyhounds to win 4-3.

Dodge County took a 2-0 lead in the top of the third inning when winning starting pitcher Brady Nelson and first baseman Devin Knudson belted back-to-back singles to start the inning, followed by a sacrifice bunt from No. 9 hitter Jordan Bale.  Leadoff hitter Erick Bungum then put the Diamondbacks in front 2-0 with a two-RBI single.

Dodge County added to their lead in the top of the fourth when cleanup hitter Hayden Sheeran belted a solo homer to make the score 3-0, and they tallied what wound up being the winning run in the top of the seventh when a pair of local high school standouts, Karver Heydt from Hayfield and Jake Coshenet from Byron belted back-to-back two-out doubles to put the Diamondbacks in front 4-0.

Nelson held the Greyhounds’ bats in check through the first six innings, giving up only two hits, but Austin got on the scoreboard in the bottom of the seventh when first baseman Josh Molina drew a walk, and he went to second when designated hitter Mark Harber hit a grounder to first, and the throw from Dodge County first baseman Hayden Sheeran hit Molina in the back on his way to the bag for an error, the only miscue in the field for both teams for the game.  Catcher Nestor Jiminez followed  with a single to load the bases, and, with two outs, second baseman Jack Dankert belted a two-out, RBI single to score Molina to cut the Diamondbacks’ lead to 4-1.

The ‘Hounds added two more runs in the bottom of the eighth when left fielder Alex Ciola smacked a grounder that took a huge hop over the head of Sheeran and down the right field line for a double.  Eric Torres follwed with a single, and both runners scored on a two-out, two-RBI double from Molina to cut the Dodge County lead to 4-3.  After reliever Jordan Hart held the Diamondbacks scoreless in the top of the ninth, the Greyhounds picked up a ringing double to deep left from Dankert, but Nelson was able to enduce a fly ball to shallow center and a fly ball down the left field line that was caught by left fielder Jake Coshenet to end the game.

With the loss, Austin is now 11-5 on the season, and the Greyhounds are right back into action today (Saturday) in Wanamingo versus the Jacks in another Twin Rivers League game, with first pitch at 2:00 p.m.