Jake Owen is coming to Mayo Clinic Health Systems Event Center on Thursday, October 20th. Tickets start at $39.50 plus applicable fees and go on-sale Friday, May 13th at 10:00am. 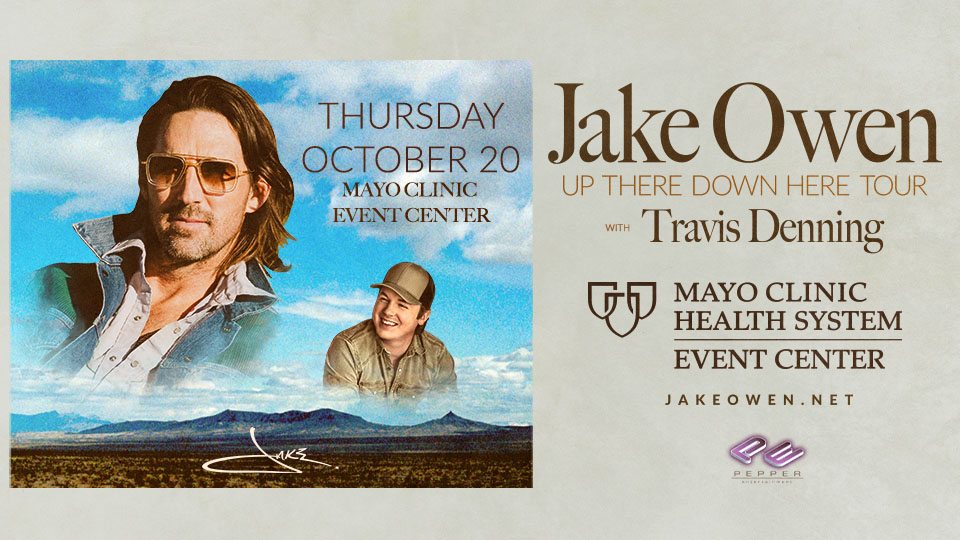 Multiple chart-topping singer/songwriter Jake Owen’s new single “Made For You” is rapidly climbing the Billboard Country Airplay charts. With eight #1 songs to his name, “Made For You” follows Owen’s fastest-rising career #1 single, “I Was Jack (You Were Diane)” and most recent #1 single, “Homemade.” Owen’s songs have resonated with listeners and audiences everywhere with 2X PLATINUM anthem and Most Played Song of the Decade “Barefoot Blue Jean Night,” PLATINUM-certified hits “Beachin,’” “Anywhere With You,” “Alone With You,” “The One That Got Away,” and GOLD-certified “American Country Love Song.” Owen’s sixth studio album, GREETINGS FROM… JAKE, produced three Top 10 singles, including two #1 singles and his current top 30 and climbing “Made For You.” Signed to Big Loud Records, Owen is reunited with award-winning Joey Moi, who helped produce his breakout Barefoot Blue Jean Night album, which landed at #1 on the Billboard Top Country Albums chart and garnered four consecutive #1 hits.

Travis Denning will be opening the show.

A native of Warner Robins, Georgia, singer/songwriter Travis Denning has been nominated for CMT “Breakthrough Video Of The Year” for his first No. One and GOLD-certified single, “After A Few.” Accelerating his ascend from a chart-topping single, Denning released his new single “Where That Beer’s Been,” available at country radio now.