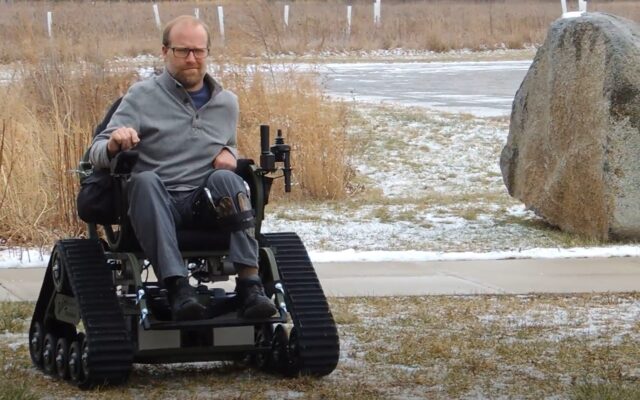 Children and adults with limited mobility now can more easily explore the 10 miles of trails at Austin’s Jay C. Hormel Nature Center no matter if the surface is paved, grassy or covered in snow.

Thursday, the Jay C. Hormel Nature Center and its nonprofit Friends of the Nature Center joined supporters to unveil two Action Trackchairs available for free, public use at the nature center. A third trackchair is expected later this month. 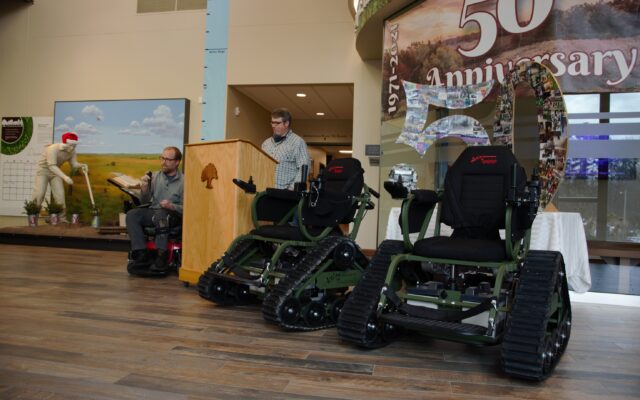 Donors and the Friends made a nearly $41,000 investment in three trackchairs – an idea proposed by Jon Kittleson of Austin – to allow those with cognitive or physical disabilities limiting their mobility to have better access at the center’s nearly 530 acres of woods, prairie and creeks. Just under one mile of the center’s trails have a paved surface.

While most of the trails are grassy, they are not ideal for either pushed or powered wheelchairs, said Luke Reese, director of the Jay C. Hormel Nature Center.

Action Trackchairs are a twin-tracked, electric wheelchair with the power and traction to go over grass, mud, sand and snow as well as climb hills and go through shallow water while traveling about 3 miles per hour with a zero-turn radius.

Paul and Joanne Worlein, of Austin, donated $25,000 through the Austin Area Foundation to cover nearly the entire cost of two trackchairs after viewing a demonstration of the equipment this summer at the nature center.

Kittleson, who uses a power wheelchair, proposed in May that the nature center get a trackchair for the community. Kittleson, who has a muscular and neurological condition known as Rapid Onset Dystonia Parkinsonism that makes walking difficult, became familiar with trackchairs at Ironwood Springs Christian Ranch near Stewartville.

Trackchairs, however, are not feasible for most people, Kittleson said, and most power chairs are not designed to be used on snow, sand, mud, grass and uneven ground.

His story inspired the Friends board.

Austin Eagles Lookout Aerie 703 gave $7,065 toward a third chair, with the Friends of the Nature Center committing $7,000 along with $1,000 donated by Mayo Clinic Health System and $500 by Freeborn-Mower Cooperative’s Operation Round-Up.

The Friends seeks to enhance and encourage environmental education, scientific opportunities and nature enjoyment at the center, one of Austin’s top attractions. The center is owned and operated by the City of Austin and greatly supported by the Friends.

Children with disabilities or an injury affecting mobility can use the trackchairs to better participate with peers in the center’s outdoor programming that includes – among many student visits – each school year hosting classes for every grade of Austin students from kindergarten through eighth grade.

Each trackchair – a product of the Action Trackchair company based in Marshall, Minn. – features a joystick controller for the user or someone walking alongside to control via a tethered connection.

Trackchairs also have a safety lap belt and harness; tilting option; and two 12-volt wheelchair batteries that, when fully charged, can last for five hours of continuous use or up to seven miles of travel depending on terrain and user weight, which is maxed at 250 to 300 pounds.

The Friends expected all three trackchairs to be available for use most of this fall but the U.S. supply chain challenges led to manufacturing delays. The third trackchair will have adjustable armrests and be nearly 10 inches smaller in width than the other two and accommodate a user weighing up to 250 pounds.

Nature center staff have created an online reservation system on their website for the trackchairs. Users will need to sign a liability waiver form; those younger than age 18 will need a parent or guardian to sign the form and an adult to supervise the child using a trackchair. Staff will give brief instruction on the chairs.

The Friends and nature center staff have made improvements to the trails in recent years, including directional signage, trailhead kiosks and restored trail shelters. They also have secured state funding to pave a trail in 2022 to the observation tower.