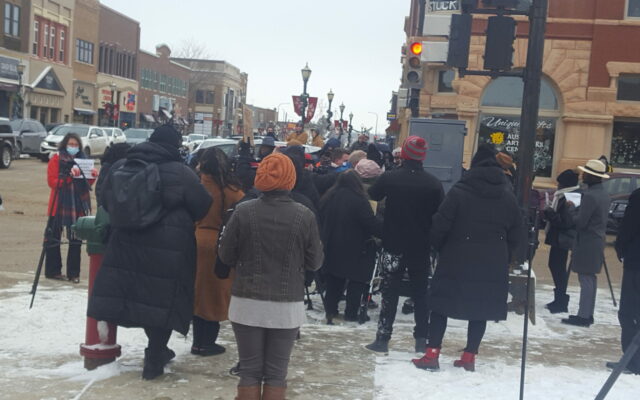 A large crowd of people gathered at the intersection of 2nd Avenue and Main Street in downtown Austin near the Mower County Law Enforcement Center Thursday afternoon to protest the officer-involved shooting that took the life of 38-year old Kokou Christopher Fiafonou of Austin in the parking lot of the Kwik Trip gas station in northwest Austin on the evening of December 23rd.  The fatal shooting was the conclusion of an incident that had lasted for more than 24 hours, as a report from Austin Chief of Police Dave McKichan stated that at approximately 9:30 p.m. that evening, Fiafonou exited an apartment in the 1200 block of 4th Avenue Northwest and then walked to the gas station in the 1200 block of Oakland Avenue West, followed by the authorities.  The report went on to state that Fiafonou, who was armed with a knife, confronted officers on the scene, and at one point, Officer Zachary Gast discharged his firearm multiple times, striking Fiafonou.  Officers on the scene rendered medical aid to Fiafonou and called  for an ambulance, but Chief McKichan stated that he later died at the scene.

The protesters claimed that Fiafonou was harassed by officers while in the midst of a mental health crisis, and they also held up signs demanding that the Austin Police Department fire and prosecute the officers involved, turn over all footage of the incident to Fiafonou’s family, and to compensate them for their losses.  The rally later moved from near the Law Enforcement Center to the Kwik Trip gas station where the fatal shooting occurred.

The Minnesota Bureau of Criminal Apprehension’s investigation into the incident is ongoing.  The results will be submitted to the Mower County Attorney’s Office for review.  Officer Gast, who has been with the department for two years, has been placed on standard administrative leave.