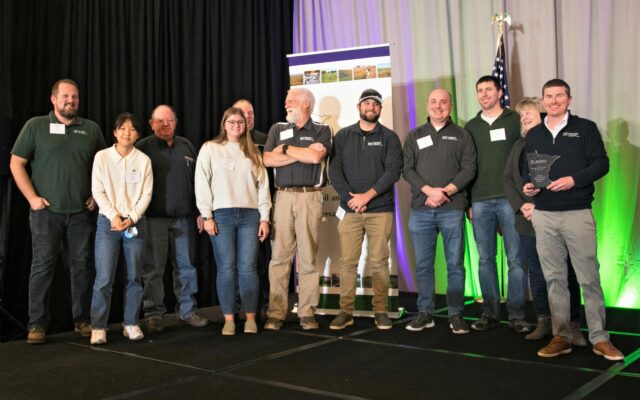 For its extensive conservation efforts and various leadership roles at the state level, the Mower Soil & Water Conservation has been honored with the top award for SWCD offices in Minnesota.

Mower SWCD on Tuesday was recognized as the 2021 SWCD of the Year by the Minnesota Association of Soil & Water Conservation Districts (MASWCD) at the organization’s 85th annual meeting in Bloomington, Minn.

MASWCD gives the award annually to one of the 88 SWCD offices in the state to recognize and inspire leadership within the SWCDs to go above and beyond the base capacity. Mower SWCD last received the award in 1996.

Mower SWCD District Manager Justin Hanson accepted the award Tuesday with Mower SWCD staff and two board members Jim Kellogg and Randy Smith, who also serves on the MASWCD’s Board of Directors. He expressed great appreciation for the award and thanked the many partners who have worked with Mower SWCD.

This award, he said, is an example of how effective conservation can get done when you have “everyone rowing downstream together. He called his staff as a “brilliant and passionate group” that allows him to pursue grants and take chances on innovation.  Hanson also credited the Mower SWCD board and the strides it has made in recent years. The board is more than an advisory group for the staff, Hanson said, adding, “They roll up their sleeves and get involved with our work.”

Mower SWCD was recognized for having an exceptionally engaged board; highly skilled technical and administrative staff; and an outstanding manager, all dedicated to delivering a wide range of conservation services geared toward their diverse base of land and water resources,” MASWCD executive director LeAnn Buck said.

Mower SWCD’s board members are effective communicators with their county board as well as their SWCD peers in their region and across the state, Buck said. Hanson also is a graduate of the MASWCD Leadership Institute, and, along with leading a strong staff of conservation professionals, serves in leadership roles at the regional and state level, she said.

Technical staff with Mower SWCD, she added, also have a depth of experience and expertise designed to meet the needs of and communicate effectively with Mower SWCD residents whether it be on issues of soil health, water-quality monitoring, habitat work or watershed management, among others.