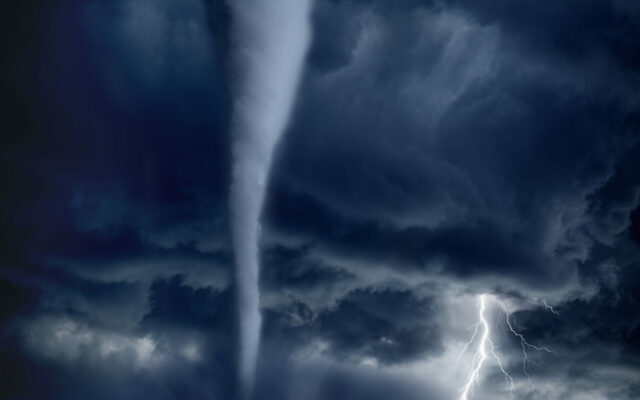 Two people were reported to have suffered non-life threatening injuries in the town of Taopi in Mower County as a result of a tornado that struck the town Tuesday evening.

A Tornado Warning was issued for southeast Mower County at approximately 10:37 p.m. Tuesday evening, and shortly after that warning, Mower County Sheriff Steve Sandvik stated in a report that 911 calls regarding multiple damaged homes and trapped residents from the Taopi area were received.

The Mower County Sheriff’s Office, fire departments from Adams and LeRoy and other mutual aid partners responded to the calls.  Sheriff Sandvik stated that Mower County Public Works and local utility companies responded to downed power lines, gas leaks and debris in the area.  There was one report of two residents trapped in their basement and they were rescued and taken to Mayo Clinic Health Systems in Austin for evaluation and treatment of non-life threatening injuries.

The affected areas in Taopi were searched and evacuated as needed, and Sheriff Sandvik stated that sheltering was supplied to three families and others sheltered with family and/or friends.

The LaCrosse, Wisconsin office of the National Weather Service has surveyed the Taopi area and determined that the town suffered a direct hit from an EF2 tornado, which can pack winds anywhere from 111 to 135 miles per hour. Mower County Emergency Manager Amy Lammey is asking for pictures to be shared to [email protected] for damage assessment, and Sandvik added that the public is being asked to stay out of the area unless they have specific business or purpose to be there while crews start the recovery and cleanup process.

Numerous other tornado and severe thunderstorm warnings were issued in southeastern Minnesota Tuesday night into early Wednesday morning, including a report of a radar-confirmed tornado over the city of Spring Valley in Fillmore County, but there were no reports of a touchdown or possible damage.