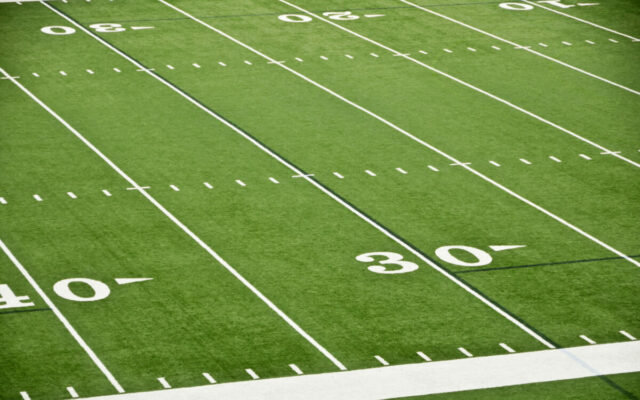 The LeRoy/Ostrander Cardinals and Grand Meadow Superlarks renewed aquaintences on the football gridiron Friday evening in a District 9 Southeast matchup in LeRoy, and it was senior running back Isaac Harmening tallying a pair of 4th quarter touchdowns, one receiving and one rushing, and the Superlarks defense forced four Cardinal turnovers in a 22-6 Grand Meadow win.

Grand Meadow senior quarterback Cael Gilbert scooped up the opening kickoff of the game at his own 26, made his way down the sideline, cut left, found a seam and outran everyone to the end zone for a 74-yard kickoff return to open the game to give the Superlarks an 8-0 lead on junior running back and wide receiver Corbin Ludemann’s 2-point conversion run.  That would be the only score of the game until the 4th quarter, as both defenses dug in from there, with LeRoy/Ostrander’s defense turning Grand Meadow over on downs twice inside the 10-yard line in the first half, and the Superlarks defense forced four turnovers, three in the second half, the last of which an interception by defensive back Connor Munson that gave the Larks the ball at their own 35.  Grand Meadow’s ground game moved the ball deep into the red zone from there, and ten plays later, a play-action pass on 4th and 3 from the 4-yard line from Gilbert to Harmening gave the Superlarks a 14-0- lead after the 2-point conversion was no good.

LeRoy/Ostrander started their next drive from their own 28, but Grand Meadow’s defense again rose to the occasion and stopped the Cardinals on four plays, giving their offense the ball at the Cardinal 35 yard line.  A 10-yard run on 4th and 7 by Ludemann was the key play during the ensuing drive that saw Harmening barge into the end zone from five yards out for a touchdown and a 22-0 Grand Meadow lead after Ludemann’s 2-point conversion run.

LeRoy/Ostrander’s only score of the game came on the next drive as starting from their own 35, the Cardinals’ passing game quickly moved the ball down the field, and on the fifth play of the drive, sophomore quarterback Camden Hungerholt found sophomore wide receiver Carter Sweeney with a 25-yard touchdown pass to make the score 22-6 after the 2-point conversion pass was broken up.  The Cardinals attempted an onsides kick following the touchdown, but it was recovered nicely by Grand Meadow’s Logan Bachman, and the Superlarks ran out the clock from there to register the win.

Grand Meadow moves to 3-2 on the season with the win, and they return to action at home next Friday against Southland at 7:00 p.m.  With the loss, LeRoy/Ostrander is now 1-4 on the season, and the Cardinals are back in action in Spring Grove next Saturday against the state-ranked Lions, with kickoff at 5:00 p.m.