Is the end near? Aaron Rodgers’ cryptic post has Packers fans talking 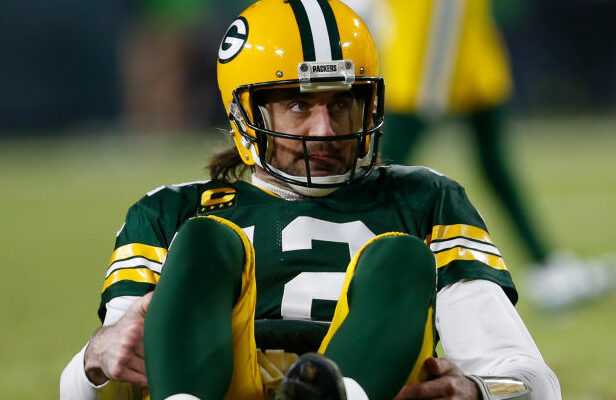 GREEN BAY, WISCONSIN - JANUARY 22: Aaron Rodgers #12 of the Green Bay Packers on the ground after being sacked during the game against the San Francisco 49ers in the NFC Divisional Playoff game at Lambeau Field on January 22, 2022 in Green Bay, Wisconsin. The 49ers defeated the Packers 13-10. (Photo by Michael Zagaris/San Francisco 49ers/Getty Images)

NFC North football fans are reading between the lines of an Instagram message posted by Packers’ Quarterback Aaron Rodgers, wondering if it signals the beginning of the end for the legendary #12’s time in Green Bay… again.

“To the men I got to share the QB room with everyday, Matt, Nathaniel, Luke, Jordan and Kurt, you guys made every day so much fun and I’m so thankful for the daily laughs and stress relief you brought me every week of the year. I love you guys,” Rodgers wrote on Instagram Monday night.

“To my teammates, past and current, you are the icing on the beautiful cake we call our job; football. the friendships that we have will transcend our collective time in this game and I am so thankful for the role that each of you have played in making my life that much better. I love you guys, and cherish the memories we’ve made.”

The possibility of Rodgers playing for a new team, or possibly retiring from football altogether, has been a hot topic among sports fans for a year at this point. Rodgers did return to lead the Packers last season, after which Rodgers won the Associated Press NFL Most Valuable Player Award for the second consecutive year.