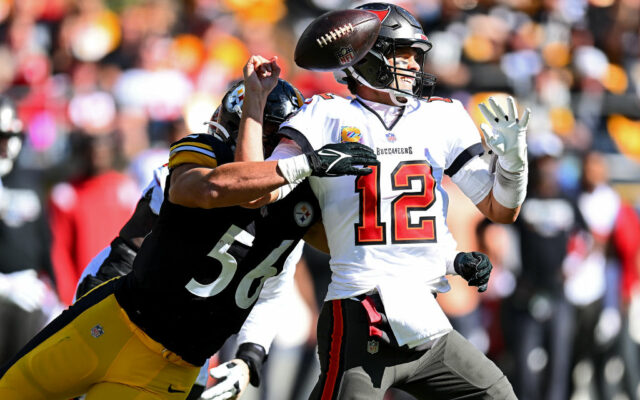 PITTSBURGH, PENNSYLVANIA - OCTOBER 16: Alex Highsmith #56 of the Pittsburgh Steelers forces a fumble by Tom Brady #12 of the Tampa Bay Buccaneers during the second quarter at Acrisure Stadium on October 16, 2022 in Pittsburgh, Pennsylvania. (Photo by Joe Sargent/Getty Images)

Future Hall-of-Fame Tampa Bay Buccaneers QB Tom Brady’s comments from a podcast went viral this week after he compared the rigors of playing in the National Football League to soldiers being deployed oversees.

Brady made the unfortunate analogy while speaking to NBA star Kevin Durant on the podcast, “Let’s Go”.

While speaking to Durant about maintaining a healthy work-life balance as a 45-year-old NFL player, Brady said, “You know — and you feel certainly me being 45. Now, it’s like, do I just think the same way? Do I still? I almost look at like a football season, like you’re going away on deployment here and military. And it’s like, man, here I go again.”

Durant seemed to agree with the comparison.

Brady’s reputation as a fierce competitor is well known, but his tone-deaf comments didn’t sit well with some current and former members of the U.S. military.

We both wear a uniform, and our marriages/relationships can be strained, but the similarities end there.

He plays a game to entertain people. We risk our lives to defend this country.