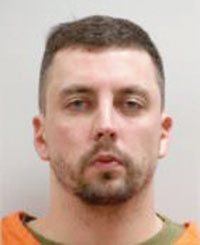 A Rochester man who rear-ended another vehicle while intoxicated on Interstate 90 near milepost 193 in Dexter Township in Mower County on the evening of Saturday, December 15th, 2018, injuring the driver of the other vehicle has been sentenced to jail time, supervised probation, fines and community work service in Mower County District Court.

35-year old Jacob Robert Kaput was sentenced Wednesday to 360 days in jail, seven years of supervised probation, $4,670 in fines and fees and 100 hours of community work service for a felony charge of 1st degree DWI, under the influence of alcohol.  A 72-month prison sentence was stayed for seven years if Kaput complies with the terms of his probation, and Judge Kevin Siefken determined that Kaput could serve the 360 days in jail in increments of 60 days on work release.  Judge Siefken also determined that Kaput would be subject to electronic home alcohol monitoring in 30 day increments that started on December 1st, 2020 and will continue starting every December 1st through 2025.

Kaput first pleaded guilty to the charge in September of 2019, and he was convicted in January of 2020.  Gross misdemeanor charges for criminal vehicular operation, bodily harm, under the influence of alcohol and for driving restrictions, limited license violation, plus also a misdemeanor charge for no proof of insurance in the case were dismissed with Kaput’s guilty plea.